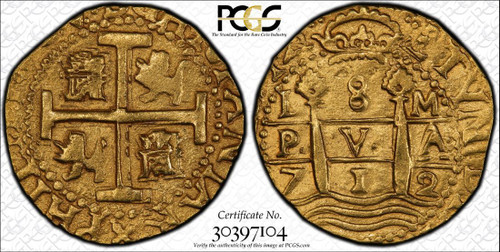 The story of the 1715 Fleet shipwreck is fascinating, and we encourage anyone reading this auction listing to do further research to learn more about the events leading up to the 1715 voyage, the day of the disaster, the subsequent salvage in the same year, and all events occurring through today. For those who want to know now, we will provide the following summary of the 1715 Fleet:

On July 24, 1715, a fleet of 12 ships left Havana for a return voyage to Spain. The ships carried a massive cargo of gold, silver, jewels and even everyday commodity items. On July 30-31, 1715, the fleet encountered a terrible hurricane off of the east coast of Florida and all but one ship was lost to the sea. The surviving ship was the Grifon, a French vessel. The remaining 11 ships--all under Spanish ownership--were lost forever, including over 1,000 souls, and the massive fortune belonging to the Spanish Crown.

The smallest ship out of the 12 vessels sailing back to Spain was the patache (a lighter, quicker type of ship) Nuestra Senora de las Nieves de Animas. It carried 194 tons of cargo, compared to other ships such as the Capitana, which was laden with 471 tons of merchandise. Despite her relatively small size, the Nieves de Animas has thus yielded the most in terms of riches via salvage efforts.

During the 1960s and into the 1970s, treasure hunters brought lost treasures from the 1715 Fleet to the surface and into the mainstream after over 250 years on the ocean floor. One of the leading pioneers in this effort was Melvin "Mel" Fisher (deceased) who owned Cobb Coin Company in Key West, Florida. In June of 1988 Fisher's crew uncovered what is now referred to as "the carpet of gold" about three miles south of Fort Pierce Inlet. Hundreds of gold and silver coins were recovered and the coin offered here is one of the coins found on that glorious day in June 1988. For a contemporary account of that particular day, please see the photo we included of a June 11, 1988 Palm Beach Post article.

The coin we present to you in this listing is notable in that it was purchased directly from Mel Fisher by our consignors. It has been in the possession of the original owners since July 21, 1988, which is when it was acquired from Mr. Fisher for a tidy sum of money at that time. The consignors relayed to us their account of the day they purchased the 8 escudos you see in the pictures above. Mel escorted them through his Key West museum and shared his stories of treasure hunting; the failures, the successes, and everything between. This coin was offered and purchased at that time. It has since been in responsible custodianship and, now, is being offered for sale for the first time since 1988.

This 1712 8 escudos of Phillip (Felipe) V is on the heavier side of those salvaged, weighing in at 27.01 grams, and duly noted on the original certificate provided by Mel Fisher. The certificate of authenticity will be provided to the buyer of this item. It is cataloged as KM-38.2, Fr-7 and Onza-240. The mint is Lima, Peru, with the usual assayer "M", for Melgarejo. As previously stated, this piece is 27.01 grams. It is well struck and displays respectable luster throughout. We would classify the current offering as 90% round, which is above average for the issue. The primary date is bold, with 30% of the secondary (peripheral) date present. Of significance is the completeness of the crown, which is more fully represented than that of any other 1712 8 escudos we have examined--in person or via auction archives.

Gold coins from the 1715 Fleet have consistently boasted strong sales figures, which is testament to the market demand for these historically significant artifacts. Guernsey's August 2015 auction of shipwreck coins in New York City netted over $2 million USD in sales, including many items from the 1715 Fleet. The specimen offered here clearly has only upside potential in terms of value, not to mention aesthetic qualities, numismatic allure, and historical significance.

This product hasn't received any reviews yet. Be the first to review this product!